won the November 8th election with a margin which confirmed its dominant role. The party won 258 seats in the House of Representatives (Lower House), and 138 in the House of Nationalities (Upper House), whereas the military backed opposition Union Solidarity and Development Party (USDP) was reduced to only 26 and 7 seats respectively. Together with the seats in the regional parliaments, the USP secured 71 seats, down from 117 five years ago. But calling the NLD victory a landslide would be beside the point since it just cemented its majority without much movement in the results.
The NLD majority is being reduced by the 25 per cent or 166 unelected seats reserved for the army. The two graphs below by The Irrawaddy newspaper and the Union Election Commission show the military block and its unreal size, symbolizing at the same time the constraints for Aung San Suu Kyi and the NLD in implementing its own policies against the military and its veto power in crucial areas. Not surprisingly, the USDP is challenging the election results with more than 750 complaints about irregularities, a practice which seems to be contagious around the world these days.
Despite the Covid problems and the ongoing fighting in several parts of the country, the voter turnout was very high with 27 out of 38 million eligible voters or 71 per cent. But 1.5 million voters were excluded either because of the Covid pandemic or ongoing local fighting, especially in the Rakhine and Shan States. Altogether 87 political parties had fielded a total of 5,639 candidates, a pluralistic feast of democracy in a very difficult political, social, and security environment. 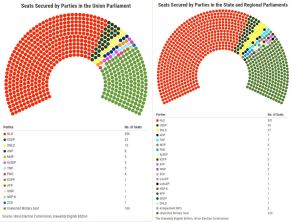 Aung San Suu Kyi has been heavily criticized by the international media for not offering any viable solution for the Rohingya crisis. Some were even suggesting to withdraw her 1991 Nobel Peace Prize, assuming that, with the NLD in power after fifty years of mismanagement under the military, Myanmar would morph into a textbook democracy without much delay. This approach betrays a lack of understanding for the complexity of the political problems. The Shan State for example, which constitutes about a quarter of the country, was part of Thailand until 1893 when the British colonizers annexed it for Burma. When this area was invaded after 1949 by parts of the National Chinese Guomindang army, beaten and expelled from Yunnan by Mao’s Communists, the international community did not care that the local populations were forced to produce opium and heroin to feed and arm the invaders. Under the Truman doctrine and the domino theory, they were seen as allies against China, and even got covert support in armament and logistics from the United States. The heavy handed treatment by the Burmese army added to the resistance of most ethnic minorities in the region against the central government in Rangoon. This is only one example why ruling the ethnic and political quilt of a country, still far from being unified, is more than difficult. It is therefore a positive move that the NLD, in a letter dated 12th November to 48 ethnic parties, called for an end to the civil war and to join them in building a federal democratic union. Self-government and regional autonomy had been promised during the independence process in 1948, but systematically prevented by the military regimes with the typical argument that the integrity of the county was paramount. A NLD spokesman said that the new government should be a “unity government”. Given the historical and political background, integrating the ethnic parties who have lost many seats to the NLD is certainly a herculean task but a dream for the country.

The election results show that an overwhelming majority of Myanmar’s citizens support Aung San Suu Kyi and the NLD while rejecting the persisting power of the military with the help of a constitution they have written themselves. It is noteworthy that the voters, aware of the shortcomings of the NLD government during the last five years, are obviously more patient than the international media, so prepared to drop Aung San Suu Kyi as un unsuccessful politician who did not manage to speed up the expected democratic revolution in Myanmar. 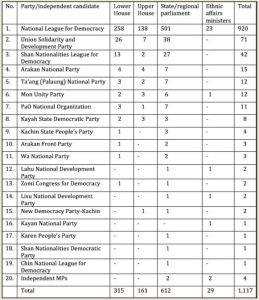