Partyforumseasia: The democratic era in Indonesia has seen quite a number of changes to party and election laws… and quite a number of creative adaptations to them by the political parties. Advertising in newspapers to recruit more candidates may be a rather unique exercise, though, probably a first world wide.

Straits Times, Singapore, is taking that up on 29 January 2013. Here is the link:

The article is quoting Yunarto Wijaya from Charta Politika in Jakarta on the ‘cash for candidacy problem’: “This is why we have this term ‘dowry’ where candidates pass money to party officials to ensure their names are on the list.”
Growing – and 4-fold is really ambitious – with the help of self-funding candidates may be a strategy many parties did not dare to dream of so far. 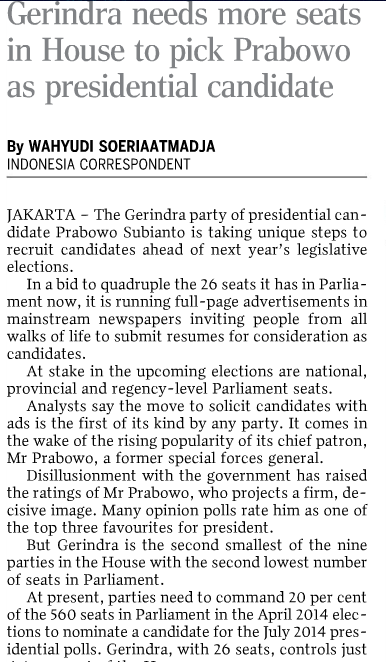