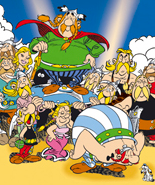 Partyforumseasia …would never say it isn’t. The debate is inside the party about the two top leadership posts. It is an old habit since the times of Asterix about 2000 years ago to lift “born” leaders on a shield without wasting time for elections. Acclamation is sometimes acceptable if clear majorities are evident. But the normal way of determining party leaders is a contested election because it shows the margin of support for the winning leader. Obviously some leaders in UMNO want to do it the Asterix way, without the shield of course. Some others seem to prefer a proper election. But both are sure that UMNO is a democratic party:
Pahang’s chief minister Adnan Yaakob told reporters that he is against the uncontested top job solution: “UMNO is a democratic party. It is better if we do not do this because it will show that we are autocratic”. Deputy Prime Minister and UMNO deputy leader Muhyiddin Yassin who would profit from an uncontested re-election did not want to comment.
Actually the last contested election for the UMNO leadership was in 1987, 26 years ago, when Dr. Mahathir Mohamad narrowly won against Tengku Razaleigh Hamzah, which led to a party split. 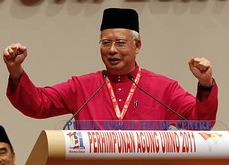