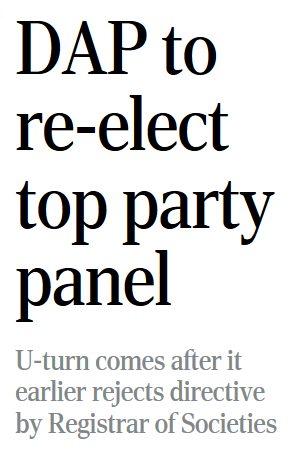 Partyforumseasia: The GE 13 election results have been a big shot in the arm for the DAP. But ignoring the Registry of Societies’ verdict on the internal party elections could not be a viable policy, as different as the internal perception may have been. The danger of being deregistered seems to have changed the minds of the leadership.
As in most similar cases the complaint to the RoS came from disgruntled members of the party. Internal party elections regularly highlight and reveal the ambitions of members and candidates which, more often than not, do not overlap with their image and popularity. Standing for elections is a highly emotional risk and affects the sensitive egos of party activists.