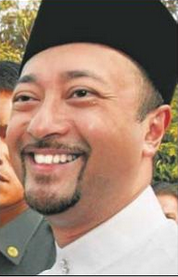 Partyforumseasia: Fierce competition inside a political party is the best time for observers and researchers to get a better picture of what is going on inside. The preparations for the internal elections which should have taken place already in 2012 but were postponed because of the May 2013 general election reveal a few things about UMNO after the extremely narrow victory which keeps it in power.
One interesting detail is that six candidates compete for three vice-presidential posts whereas PM Najib Razak und his deputy Muhyiddin Yassin remain unchallenged.
Among the six vice-presidential hopefuls one is more interesting than most of the others because he happens to be the son of former party president and long serving prime minister Mahathir Mohamad. This son, Mukhriz Mahathir, newly appointed chief minister of the federal state of Kedah immediately after the May election, is on the way up and would be a possible successor of PM Najib if elected as vice-president.

His father, Dr. Mahathir Mohamad, like many other elder statesmen, continues to comment on everything political in the country, but still wields more real influence than most of his peers. His direct support for his rising son and his vice-presidential ambitions may help a lot in this special area of political culture. (In most European countries this open support would be counterproductive). 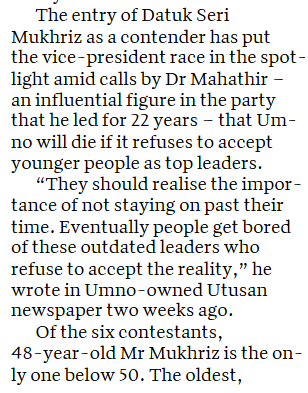 But there is a nice irony involved which seems to go unnoticed by father Mahathir when he says:
“Eventually people get bored of these outdated leaders who refuse to accept the reality.”
A European proverb is saying that you should not throw stones if you sit in a glass house…

Another interesting detail is the contest for chairing the women’s wing. Incumbent Shahrizat, who was involved in a massive corruption scandal under the headline “Cowgate” seems to enjoy endorsement for another term by PM Najib. But her challenger, senator Mazlah Maznan has good chances to replace Shahrizat exactly because of Cowgate.
UMNO is the biggest Malaysian party with 3.4 million members and the results of next month’s convention promise to be interesting!