Partyforumseasia: Allowing Aung San Suu Kyi to run for president in the elections later this year would have changed the whole set up of parliament and government in Myanmar and ended the military control. From their standpoint it is only logical not to change the constitution which bars her from a candidacy. As far fetched as this clause may look, it is preventing a more than likely sweeping victory of the opposition. 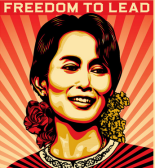 “Myanmar’s opposition leader and democracy campaigner Aung San Suu Kyi has acknowledged she will be unable to become her country’s next president after elections later this year, a decision that will disappoint millions of her supporters.
The 69 year-old Nobel laureate will instead seek to chair Myanmar’s parliament where one-third of seats are allocated to the military, according to Aung Shin, a spokesman for her National League for Democracy (NLD).
Ms Suu Kyi has conceded that despite intense lobbying Myanmar’s quasi civilian government will refuse to abolish a constitutional clause barring her from the presidency before the elections that are seen as a crucial test of the country’s move towards a freer and open society after almost 50 years of often-brutal military rule.
The clause specifically directed at Ms Suu Kyi bars anyone from becoming president who has a spouse or child who is a citizen of a foreign country.
Ms Suu Kyi’s late husband was British and their two children hold British passports. Taking the chair in parliament would boost Ms Suu Kyi’s power and likely increase unity among opposition parties.”
See the whole article in The Sidney Morning Herald, LINK here