Partyforumseasia: The much anticipated parliamentary election in Myanmar in November will probably be contested by around 70 political parties. 73 are already registered as eligible, 14 applications are still pending with the Union Election Commission (UEC). Out of the 73 registered so far, 53 will run nationwide and 20 only regionally. And among the 73 there are 43 ethnic based parties which reflects the complicated multi-ethnic structure of the country. 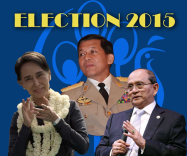 The many decades long civil wars in too many areas will make the voting process difficult if not impossible in some. But generally, the progress in regulating the election law and its supervision is being seen as positive by parties and external observers. Diversity and insufficient infrastructure will make the election a rather difficult task for everybody, and some flaws remain in details like enormous discrepancies in the size of constituencies and precincts (between hundreds of thousands and as few as 1400) which opens the doors to manipulations by the parties which can afford it.

The number of parties, a bit frightening at first glance, may be one of the easier parts of the exercise. First of all, it is much lower than the 235 registered parties in the 1990 election which was won by Aung San Suu Kyi’s NLD but not accepted by the military. Secondly, the ethnic fragmentation of the country is certainly not easy to be overcome by any single party, though many pundits predict that the NLD may win a two-thirds-majority. And finally, Myanmar is in maybe not good but numerous company with its “Multitude-Party-System“:

The parliamentary election tomorrow in Britain, the mother of the two-party-system which worked for nearly a hundred years with the first-past-the-post election system, is being contested by only seven main parties (but seven already), and additionally a multitude of smaller ones as well. The UK has 428 registered parties and Northern Ireland another 36. There are about 800 candidates from minor parties and independents. In other European countries the party systems are similarly expanding or disintegrating, Germany had 34 parties in the 2013 election, etc.

Indonesia, to have a regional comparison, had an inflation of parties after the fall of Suharto. But the country managed to reduce the number of parties admitted to run in 2014 from 46 registered to finally 12 parties qualifying.

There are many reasons to establish a political party. From obvious material interests like state subsidies in many European countries or the license of publishing a profitable newspaper in Egypt to the personal ambition of born or self-declared leaders any combination is possible. Political participation is desirable in terms of democratic principles, but the competition must be regulated in order to make the system governable. Myanmar has progressed in that direction, many say that the November election will be the best in 50 years, so the international community and the Asian neighbors can only wish the country the deserved success.
________________________________________________
More information:
The International Crisis Group offers an excellent and downloadable background paper “Myanmar’s Electoral Landscape“, Asia Report No 266, 28 April 2015  (Link here)
For the evolution of Myanmar’s political system see: Moe Thuzar and Zaw Oo in Sachsenröder, Wolfgang (ed), Party Politics in Southeast Asia, Organization – Money – Influence, 2014, ISNB 1493587145 or ISBN-13: 9781493587148, available at Amazon, Barnes&Noble and other online distributors. 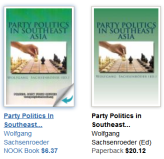