Partyforumseasia: The United States of America and the Philippines have quite a few things in common.One feature they share rather visibly at the moment is the long preparation for the next presidential election, due in the US in November 2016 and in the Philippines in May. Since President Aquino‘s term has boosted the Liberal Party, they understandably try to continue with a liberal candidate and field interior secretary Manuel Roxas. His hopes to get popular senator Grace Poe as team mate have failed since Grace Poe seems to run increasingly away in all polls and “offers herself” for the post. The Philippine Daily Enquirer praises her sensible stand on many raging issues which has earned her

plaudits from the public, her clean persona and intimate connections with show biz royalty, another similarity with the USA. But with Francis Escudero, a fellow senator, as her choice of running mate she may undermine her “presidentiable” image. Escudero has a record of supporting former president Estrada who was impeached for corruption but resurfaced as mayor of Manila.
Another quite popular team of candidates is formed by vice president Jejomar Binay

who is facing a corruption probe and Senator Ferdinand “Bongbong” Marcos Jr. , son of ousted dictator Ferdinand Marcos who allegedly syphoned away between five and ten billion US$ during his terms in office.
Voters in the Philippines, either a forgiving lot or cynical about their political class or both, seem to enjoy the presidential race and its entertaining aspects and don’t mind the expenses, like the American voters.

Historical links between the US and the Philippines:
The USA indirectly supported the Philippine Revolution which ended about 350 years of Spanish colonial rule by their own war against Spain in 1898.  Spain ceded the Philippines to the US for 200 million $. One of the leaders against the Spanish occupation, Emilio Aguinaldo, born in 1869 was the first president of the Philippines from 1899 to 1901. 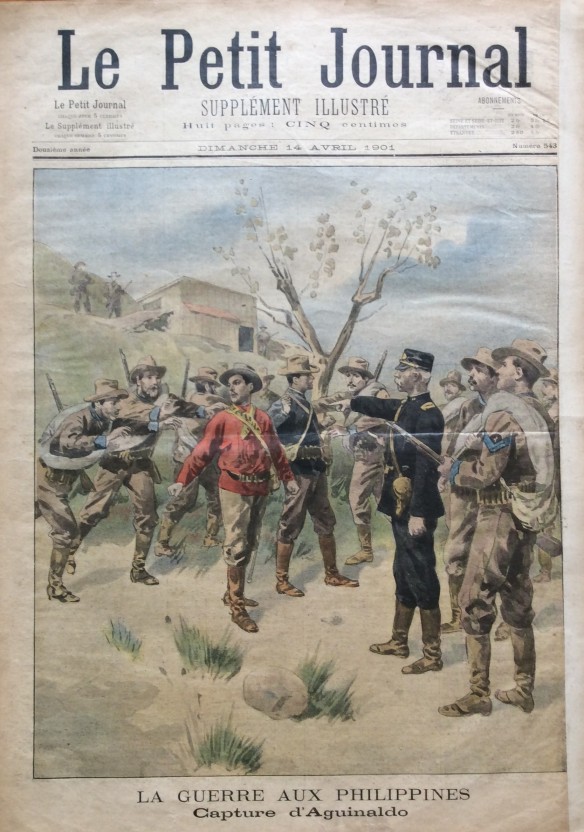 The contemporary illustration in a French journal (1901) shows Aguinaldo’s capture by US forces:

But the US quickly ended the dream of independent statehood by establishing her own colonialism in 1901. Limited self-rule granted in 1935 under president Quezon was soon interrupted by the Japanese invasion, full independence came only in 1946.
The Spanish heritage is still visible in the family names and many Spanish words in the national language Tagalog. What persists from the US-rule is widespread English with local pronunciation, the presidential system and many other legal features, the education system, close military cooperation, and 3.4 million Philippinos in the US.