Partyforumseasia: Well, the hour of truth and the final results of Sunday’s election will take some time to be announced. Logistically this election is a formidable challenge given the size of the country, the diversity of ethnic groups and ongoing violence, and the deficits in transport and communication infrastructure. What the New York Times called “the country’s first relatively free elections in 25 years” (Link here), will certainly be a milestone in the development of the political and economic latecomer among the ten ASEAN countries. Since last year, though, the military dominance is no longer such an exception. Neighboring Thailand, which used to look down on Myanmar and her military rule, is under a military junta herself. The example of the chaos in Bangkok may be on voters’ minds on Sunday, even if many are tired of the generals and dream of a more open democratic era under Aung San Suu Kyi. 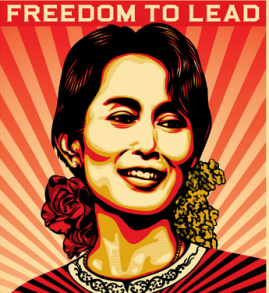 The democracy icon has been pulling huge crowds during her campaign with charisma and her personal history as victim of the generals. The military, sure, has not honored her victory in 1990, but the house arrest in her villa in Rangoon was not as cruel as incarceration could have been, and audiences with her followers over the garden gate were tolerated for many years.
What might psychologically happen to Aung San Suu Kyi is not easy to guess, but there are some telling facts:

1. Aung San Suu Kyi is getting old(er). With 70 most politicians are closer to the end of their service for the country than to the beginning. Exceptions are possible: Konrad Adenauer was 73 when he was elected as first chancellor of the Federal Republic of Germany in 1949, and he ruled until 1963. At the ripe age of 87 then, he unsuccessfully tried to become president…

2. Aung San Suu Kyi dominates her National League for Democracy in a way that some see as more authoritarian than liberal democratic. Tactical campaign moves like snubbing the Muslim minority and courting the radical Buddhists of Ma Ba Tha, betray her urge to make it this time even at the price of ignoring the democratic values she embodies for many Myanmar citizens and maybe even more for international observers.

3. The actual gamble of Aung San Suu Kyi to get the votes out for her party and herself is being reported by Reuters and AFP after an interview yesterday, 5th November:
“If we win, and the NLD forms a government, I will be above the president. It’s a very simple message. I will run the government and we will have a president who will work in accordance with the policies of the NLD.”
That would be difficult in a presidential system and is against the constitution which can’t be changed against the will of the generals. So the message for her followers and supporters is: Make sure that we win, then I will take care of the formal questions when I’m in power. But it could produce a backlash from the supporters of the military and their USDP as well because of the potential chaos which may follow an open power struggle. Myanmar voters want stability and economic recovery, the ethnic conflicts going on for much too long already.

4. Coming back to the political psychology: Many victims of oppression and violence against opposition, many in prison for long years, have developed a sense of entitlement to high office. Shih Ming-Teh of Taiwan (25 years in prison) could not even convince his own party that he should be the president. Only Nelson Mandela (27 years in prison) made it to the presidency of South Africa. Partyforumseasia hopes that Aung San Suu Kyi will  approach the election results as sober and level-headed as possible!