Partyforumseasia:One important advantage of democracy  over all other systems is the possibility to exchange an unsuccessful  government against a new team and new hope for the voters. Sometimes it happens after internal power struggles like the recent transfer from Abbot to Turnbull in Australia, sometimes it is growing unhappiness among the voters and defeat in elections. With a more open and less gerrymandered electoral system PM Najib would have lost his job already in 2013. But even under

unprecedented pressure from voters, many of whom have lost trust in him, and internal opposition in his own party, Najib seems unassailable. In this week’s ongoing party convention with 2,654 delegates from 191 divisions he shrugs off all the attacks and calmly pretends to be in fighting spirit. An admirable level of self-confidence.
His long career as a politician has been a jump-start but accompanied by a series of scandals. At the age of 23 he took over the parliamentary seat of his father, a prime minister like an uncle, and moved into the cabinet as deputy minister only two years later. Prime Minister since 2009, his former mentor and predecessor Mahathir Mohamad has now turned into his most prominent critic. Mahathir’s constant call for him to step down seems unsuccessful by now, and the UMNO-internal challenge looks neutralized. As incredible as it sounds for Malaysians and outsiders, the scandalous mismanagement of 1MDB, a sovereign wealth fund with billions of debt, and the more than dubious campaign “donation” of 700 million US$ from undisclosed Middle Eastern sources into Najib’s private account (!), seem to be swallowed by most leaders of the 3.4 million strong government party. His enemies never imagined that he got get away with that.

There are four main reasons for the strong position of Najib:

1. There is no competitor who could replace him at short notice. All party comrades who speak up are being sacked, like former deputy prime minister and deputy party president Muhyiddin Yassin,  and replaced by yes-men. Najib even declares that it is a Muslim religious duty to support the leader.

2. With the  imprisonment and effective elimination of opposition leader Anwar Ibrahim and the ambivalent stand of Islamist opposition party PAS, the threat by a strong opposition coalition has more or less vanished.

3.  Starting from Mahathir’s time, the powers of party president and prime minister have been strengthened continuously. On 3 December, Malaysia’s parliament has approved the National Security Council Bill which gives the prime minister quasi unlimited discretion to detain people and declare a state of emergency. The criticism of Mahathir sounds somewhat hollow, though, because he used the former internal security act against his challengers during his term rather extensively. 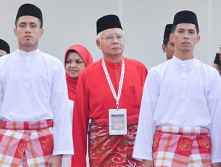 4. The main reason, however, is the pervasiveness of money politics. Widely the norm in Southeast Asia, it has been developed and fine-tuned in Malaysia, ironically again since Mahathir’s premiership. Najib, born with the famous silver spoon in his mouth, has made full use of the UMNO patronage system. As Partyforumseasia has argued earlier, UMNO cannot afford to lose an election because the whole enormous scheme would collapse and leave hundreds of thousands of party officials and supporters in the cold. And Najib cannot afford to step down because more dirty linen suspected by critical Malaysians might surface and destroy party and patronage.
The system, described as “the patronage networks that flow downward through UMNO, and that ensure the loyalty of party cadres” (Council on Foreign Relations, Link here) is a tool for which many parties worldwide may envy UMNO. But its refinancing comes from state funds and corrupt government-business links at the expense of tax payers.
As aptly as ruthlessly playing racist and religious cards, party and prime minister seem to get away with this cancerous system among the profiteers and voters. And far from being as scandalous as it sounds for most observers, the 700 million “donation” might even strengthen Najib’s position by boosting his financial discretion even more. As the saying in the Philippines goes, the Golden Rule simply means that he who has the gold will rule…

John Stewart Mill in his Considerations on Representative Government published in 1861 had warned already against money politics: “Of what avail is the most broadly popular representative system if the electors do not care to choose the best member of Parliament, but choose him who will spend most money to be elected?”