As “Party of the Functional Groups” (Partai Golongan Karya) Golkar was transformed  from a sort of NGO coalition into an electoral machine and power base of President Suharto. It was the ruling party of Indonesia from 1973 to 1999 with deep roots in practically all aspects of governance and statehood, down to the last  village, and of course, with much “experience” in state and private sector finances.

After the fall of Suharto and the begin of the democratic era, Golkar had to struggle for survival, but connections and political skills helped a lot. In the presidential election 2014 and under the leadership of business tycoon Aburizal Bakrie, Golkar supported the wrong candidate  and landed in the opposition. But experience and power instinct are bringing the party step by step closer to President Jokowi and his ruling coalition. Former presidential candidate Prabowo is not amused but as the loser no longer useful for Golkar. 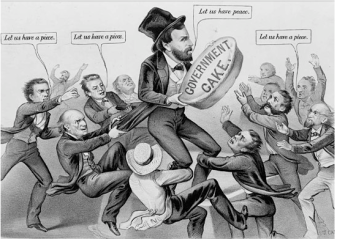 This pragmatic move in itself is normal party politics. No political party volunteers for an opposition role if it can avoid it. And Golkar’s new leader since May this year, Setya Novanto, is back as speaker of Parliament since 21 November. The little problem with this resurrection is that he had to resign from this post less than a year ago after a major corruption scandal involving a big mining company and allegations that he was asking for a 20% kickback. As former treasurer of his party, Novanto seems to have valuable financial skills, useful for the party but as well for himself. What the New York Times called “A Watergate Moment for Indonesia” (LINK) is being closely observed and investigated by the Corruption Eradication Commission (KPK), the Indonesia Corruption Watch (LINK), and the Ethics Council of the Parliament.  Gresnews, a publication focusing on Indonesian legal and political issues, called it “Setya Novanto´s Chain of Scandals” on 17 November (LINK).

Strategy-wise: The broader picture of Indonesia’s complex domestic political scene shows good reasons for President Jokowi to accept Golkar and its controversial leader in his coalition. Golkar as the second biggest party in Parliament adds ninety-one MPs to the President’s Great Indonesia Coalition and finally dismantles the  Red and White Coalition of Gerindra leader Prabowo, the 2014 presidential loser. What took only days and weeks after the presidential election in the Philippines by simple party-switching of hundreds of members of Parliament to join Rodrigo Duterte‘s house majority, has been much more difficult in Indonesia and took about two years.
For the Golkar leadership it was a long overdue step to leave the Red and White Coalition and give up its loyalty toward Prabowo who cannot provide any power perspective in the foreseeable future.
Another serious and festering domestic problem is the turmoil around the upcoming gubernatorial election in Jakarta. Protests against incumbent and long time front runner Basuki aka Ahok. He is under investigation for blasphemy after referring to the Koran in a campaign speech. In his double minority position as Chinese and Christian, Ahok may attract attacks from Islamists as well as from enemies of President Jokowi, whose deputy he was during his time as governor of Jakarta. A first big demonstration against Ahok turned unusually violent on 4 November, and another rally is to be staged on Friday, 2 November. More violence would be seen as a weakness of President Jokowi’s government.