Partyforumseasia: The infamous e-ID card graft case is hotting up.  Golkar chairman and speaker of parliament Setya Novanto has been named as a suspect, and so far, managed to get away. He is no unknown to the Corruption Eradication Commission (KPK), which he fights as an enemy of the political establishment. Gresnews, a publication focusing on Indonesian legal and political issues, called his record “Setya Novanto´s Chain of Scandals” on 17 November 2016 (LINK). 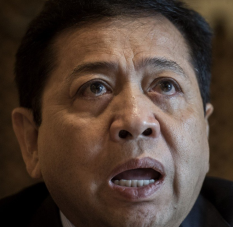 Novanto who had to resign end of 2015 in a bribery scandal of epic dimensions, was eventually cleared and re-appointed as House Speaker in 2016, and was again declared a suspect by KPK in June 2017. The new case, according to KPK, investigates the theft of 170 million USD from a project to issue electronic identity cards for the 255 million Indonesians. Sums between 5,000 and 5.5 million USD, the indictment letter states, had been openly divided up in a room in Parliament, involving at least 37 beneficiaries.
The KPK has been threatened of dissolution by its many enemies within the political elite, but President Jokowi’s reform policies may prevent such a move because it would be extremely unpopular. The question now is how tight the noose around Novanto’s neck might be or become. It is probably a sign of weakness for him to protest heart problems for not showing up for KPK hearings, but his doctors have declared him fit enough in the meantime. Obviously he has tried before some politicking in the background to influence the South Jakarta District Court to order the KPK to drop its investigation.  More than 80 witnesses have already testified against him in the KPK hearings, though.

The special Indonesian background:
Political parties need funding for their activities, lots of funding for their election campaigns, and even more funding if they buy votes and pay the canvassers.
The Indonesian party system has developed rather creative ways of raising the necessary funds by privatising the fund raising. One is the recruitment of oligarchs who can inject bigger amounts, the other one is the “scalping” of the many development and infrastructure projects which are available in the expanding economy and increasing state income of Indonesia. The mechanism is simple, in most cases the member of parliament manages to “sponsor” a project by influencing the decision making in the Parliament or a ministry, and gets a “commission”, regularly up to one third of the total cost. That method is anything but uncommon in the region in different varieties, and certainly not unknown in other parts of the world.
What sets Indonesia apart is the mindboggling size of some of the commissions paid. Since everybody knows about these procedures, many politicians have dropped any remaining reluctance to grab whatever they can get. And, no surprise, these financial skills are highly attractive for the political parties. This is one of the reasons why Setya Novanto made it back to the helm of the Golkar Party.