Partyforumseasia: The fall of Malaysia’s National Front (Barisan Nasional) coalition after nearly 61 years in power is revealing more and more dubious secrets of its business model. The advantages of being the incumbant for so long, and having practically unlimited control of the country’s rich financial resources, had led to a network of the leading UMNO and the smaller component parties with huge flows of cash, donations, and bribes. Details are being revealed one by one, all but two component parties have defected, heads are rolling, but maybe most symptomatic for the “money-politics-disease” are the astonishing amounts of valuables found in the different dwellings of defeated party president and prime minister Najib Razak. The list of confisated items so far looks unreal to say the least. 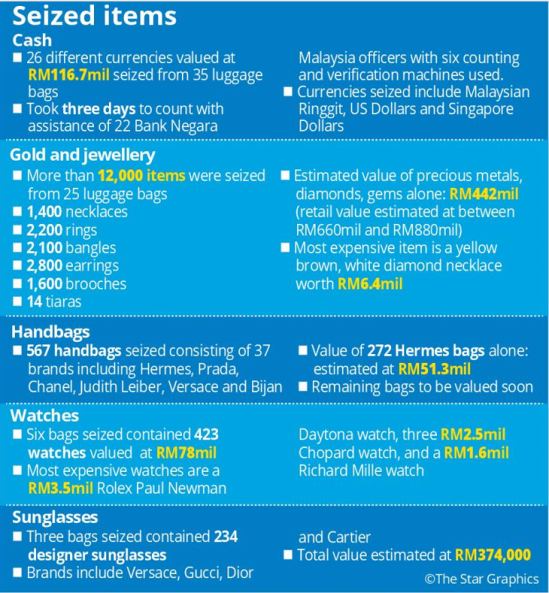 The current exchange rate is four Malaysian Ringgit for one USD.

Najib’s explanations are manifold: He was not aware of the jewellery items of his wife. Many pieces are not his own and must be returned to the jewellers.

Accepting gifts is not illegal. Most of the money was for the party, etc. He has asked his lawyers already to start legal procedures to get the confiscated items back. Nevertheless, Najib claims that his party has to reform itself and abolish money politics and payments for internal elections. But the investigations are going on, and bank accounts belonging to Najib as well as UMNO’s party accounts are being frozen. The “new – broom – governmant” under returned Prime Minister Mahathir Mohamad is trying to sweep as clean as possible.

prison term. His attempt to leave the country immediately after the election defeat was thwarted by concerned citizens, followed by an official travel ban.
Investigations into the billions lost in the 1MDB scandal are intensely going on, so far 408 bank accounts are frozen, and more indictments can be expected. It all started in 2015 with the 682 million US$ found in Najib’s private accounts making waves internationally.

The investigations go back to hundreds of transactions to “a party”, individuals, and organizations since 2011. There is hope that at least part of the lost funds can be recovered for the state budget, though experience with the Marcos and Suharto billions in the Philippines and Indonesia are not encouraging.

Meanwhile UMNO tries to pick up the pieces and convince the voters that they have understood the verdict of the voters and are serious about reforming themselves. The internal elections over the last weekend have produced mixed results, though. Najib’s former deputy Zahid Hamidi has won the presidency, in his own view to guarantee the continuity, criticized by others as hara kiri of UMNO. “Young turk” and former youth leader Khairy Jamaluddin was first runner-up with respectable 61 branches (out of 191) voting for him against 99  for Zahid.

For an overview on party funding and money politics in Southeast Asia see our new book, available at https://www.worldscientific.com/worldscibooks/10.1142/10726 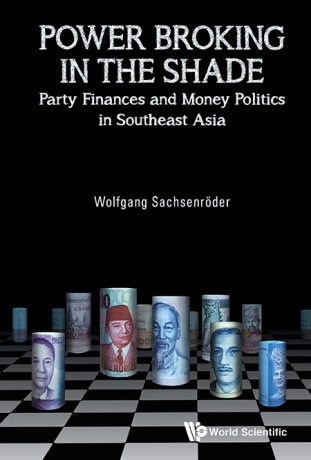