Partyforumseasia: Calling it election fever would be an understatement. The long-anticipated general election on 24th March is stirring up emotions like never before in the country’s colorful election history. And, no surprise, Prime Minister Prayuth Chan-o-cha, who is seeking election (since he assumed the premiership by ousting Yingluck Shinawatra in 2014 it can not be called re-election) is preparing the ground to prevent a surge of the surviving and diversified Thaksin-loyalists surviving predominantly in the Pheu Thai Party, the third incarnation of the plutocrat’s original Thai Rak Thai Party.
The Nation daily published a survey of the election chances on 6th March, which forecasts Pheu Thai as the biggest possible winner: 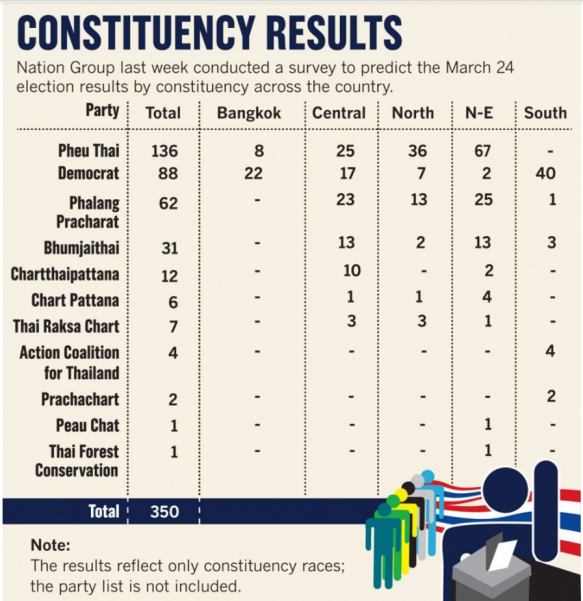 The survey focuses on the 350 constituency seats in the mixed-member proportional system and does not include the possible results of the 150 party-list members. This new electoral system has been designed to limit the chances of bigger parties to dominate the 500-seat lower house. But party strategists know how to play the piano even if it is not tuned to provide a level playing field. The Thai Raksa Chart Party, founded by many Pheu Thai politicians only four months ago, was therefore widely seen as a mechanism to add party-list seats to Pheu Thai.
These dreams have been shattered yesterday, 7th March, by the decision of the

Constitutional Court to dissolve the party with immediate effect. The surprise move of nominating Princess Ubolratana as a prime ministerial candidate turned out to be too risky a strategy. The court deemed it unconstitutional because it abused the Royalty, supposed to be above politics,  for electoral advantage. To make sure that they don’t find another loophole, the 13 members of the TRC executive committee have been banned from politics for the next ten years.

Nervousness about a deeply divided electorate is rather understandable and only the third place in the Nation survey for the Phalang Pracharat Party which supports Prime Minister Prayut must irritate the military camp. Interesting as well are the continuing regional party preferences, the Thaksin camp still dominating in the North and North East, and the Democrat Party equally dominating Bangkok and the South. The real question will come up after the votes will be counted, when coalitions will be needed to form a majority in the lower house. The incompatibilities seem to be clearly visible at the moment, but parties and politicians have shown extreme flexibility in the past when the spoils of ministerial power are being up for grabs.