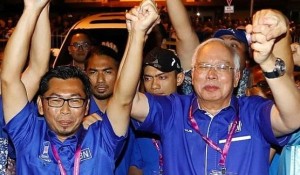 Ex-PM Najib Razak, called “Bossku” or my Boss by his supporters, after last week’s by-election win in Sabah. Dreaming of a return to power and impunity?

Partyforumseasia: Najib Razak, the former Prime Minister of Malaysia, toppled in May 2018 by the surprise election victory of the opposition, is involved in one of the world’s most spectacular political corruption scandals. When the story blew up in 2015, he “explained” that the nearly 700 million US$ in his private accounts had nothing to do with the sovereign wealth fund, 1MDB, which he was supervising, but were a donation of the Saudi royal family. The reality was different. Najib’s ruling coalition, and especially its main  party UMNO, was probably worldwide the best funded political party, with money cascades from government linked companies facilitating one election victory after the other, until May 2018, when even the pampered Malay core clientele was fed up with the level of corruption.
Mr. Najib, faced with three charges for criminal breach of trust, one for abuse of power and three for money laundering, is now telling the court that his adviser, businessman Jho Low, was behind the abuse and fraud of the 1MDB fund, from which 3.5 billion $ had disappeared. He himself pleads innocent and maintains that he did not do anything illegal. That, by the way, may not be as wrong as it sounds, because party funding was not regulated at all during his premiership. But the whole money cascade controlled by Najib and UMNO, involved public money, even syphoned away from the haj pilgrim fund, and left the new government with a huge public debt.
The clever “businessman” Jho Low, has just sealed a deal with the prosecution in the US. In exchange for one billion $ in property and other assets he is at least partially off the hook there. The blame game between Najib and Low goes on and on, each accusing the other. Low describes himself as a political scapegoat, while Najib says he has been tricked by Low. And for millions paid on jewellery with his credit card he even blames his own wife, Rosmah Mansor, who has been famous for years as collector of expensive handbags, sunglasses and jewellery.
Like Low, who is still in hiding but with a new passport from Cyprus, and managed to limit his indictment in the US, Najib may dream of sitting out his nightmare of  years in prison by slowing down the prosecution as longs as possible. With the actual domestic weakness of the Mahathir-led Pakatan Harapan coalition, and with every by-election won by Barisan, the latest just last weak in Sabah, one of the two East Malaysian federal states on the island of Borneo, he may feel more encouraged to deny everything despite the overwhelming evidence. Voice recordings, released by the Malaysian Anti-Corruption Commission and reproduced in court, obviously prove attempts by Najib already in 2016, to untangle himself from the 1MDB scandal. And the ultimate relief dream would be final impunity if the UMNO-Barisan Nasional could make it back to power. That, at least, does not look impossible. The hopes of the Malaysian voters for a more transparent, less race-based, and overall cleaner political style have not been satisfied by the new government.
Wolfgang Sachsenröder

PS: For an overview of party funding and money politics in Southeast Asia see:
https://www.worldscientific.com/worldscibooks/10.1142/10726 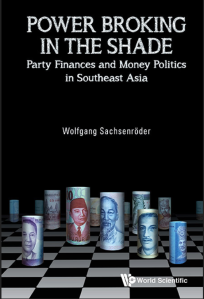 1 thought on “Najib: A Step Toward Impunity?”