Partyforumseasia:  Party switching, party hopping, candidates looking for the party which would give them the best chances to be elected, or parties shopping for the most eligible candidates, that all is common in Southeast Asia. The cartoon above by famous Malaysian cartoonist Lat from the 1980s shows the phenomenon in a light way, but Malaysia is going through a much more serious period of political turmoil at the moment. More serious because the switching persons are not just rank and file party members but parliamentarians and even ministers.

When in February this year the Pakatan Harapan (PH) government of Prime Minister Dr. Mahathir was booted out in a surprise move by defectors who found easy support from the opposition parties UMNO and PAS, Mahathir-ally Muhyiddin Yassin turned into a challenger and was appointed as Prime Minister  by the King without a vote by parliament. The new majority was defined by the King after interviewing all members of parliament personally, and the new majority remains unclear and contested until today. The change of government was criticized as coup and backdoor move by the PH supporters and welcomed accordingly by the losers of the 2018 election, UMNO and PAS. When they found themselves in opposition after the unexpected defeat, and after having sufficiently licked their wounds, this old guard realized that they had lost all their access to state coffers and the lucrative side jobs in government linked companies. UMNO, once supposed to be one of the richest political parties in the world, was suddenly cut off from the money flows. And their former Prime Minister, Najib Razak, found himself in court with numerous charges of corruption.
On the side of the Mahathir and PH supporters, the 2018 watershed election had created high hopes for a more transparent and democratic political style and less race based competition in this multi-ethnic and multi-cultural country. 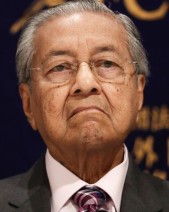 At age 94 Dr. Mahathir is as defiant as ever

On 18th May, the first sitting of parliament after the switch to Prime Minister Muhyiddin and his Perikatan Nasional (National Alliance) coalition, turned out to be remarkable in several aspects:
1. The sitting, according to the constitution, would have had to confirm the new Prime Minister and his government.
2. Mahathir had initiated a no-confidence motion against Muhyiddin for this meeting, which was accepted by the speaker.
3. But the schedule for the sitting was reduced to the introductory speech of the King. Due to the Covid-19 threat, this was the explanation, no debate was allowed after that.
4. The next sitting of the parliament was adjourned to July.

Conclusions:
1. The shortened sitting has spared Muhyiddin the no-confidence vote. That might allow doubts on his majority and legitimacy, as well as his confidence in the coalition which supports him. It is indeed wobbly because the UMNO members feel undercompensated with cabinet posts and GLC directorships.
2. Mahathir and his remaining PH supporters feel betrayed and encouraged to sabotage Muhyiddin at their best ability.
3. The top positions in the federal states are being ferociously contested as well. Mahathir’s son Mukhriz is the first victim after losing the majority in Kedah.
4. The beleaguered PKR party has tried to prevent defections after two federal state MPs left. They had made them sign a no-defection clause and threaten them with a fine of 10 million RM (more than 2 million USD). That sounds rather unrealistic to be enforced.
5. The estimated majority of the Muhyiddin government is two or three seats, or the same two or three seats short of the majority, depending on the political standpoint.
6. Wafer-thin majorities, even minority governments, are quite common nowadays all over the world. Malaysia obviously needs more time to get used to it, or make it back to big, clear, and stable majorities.

6 thoughts on “A Majority is a Majority or What?”