Partyforumseasia:   On 23 June, Prime Minister Lee Hsien Loong advised President Halimah Yacob to dissolve the 13th parliament and issue the Writ of Election. The time schedule is tight; nomination day is the 30th of June. After 9th of July as “cooling-off” day, the voting will take place on the 10th. 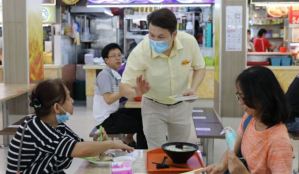 Typical campaigning in a food court in Singapore. Effectiveness is not guaranteed, but the tradition is at least more environmentally friendly than the poster battles in other countries.

As a former colony, Singapore inherited the British electoral system which gives the prime minister the prerogative of calling for elections at a time which he deems suitable for his government. Lee has hinted at elections several times in the last few months, and may have  hesitated to reconsider the dates due to the Covid-19 outbreak The pandemic appears to be stabilising after the unexpected mass infections among the foreign workers who live in congested dormitories under not always the best hygienic conditions are fizzling out. The mortality rate in Singapore is rather low, but a lockdown called “circuit breaker” has affected the economy quite badly. Like many other governments around the world, Singapore has injected massive amounts of cash to cushion the impact and help citizens who lost their jobs and businesses most affected by the lockdown. Even the foreign workers under quarantine were fed and paid fairly, instead of being sent back to their home countries such as India and Bangladesh.
The international image of the city state, apart from cleanliness, very low corruption levels, and high- tech affinity, is also dominated by the longevity of the ruling People’s Action Party’s (PAP) grip on power and its efficient governance. So far, the PAP has always won an absolute majority, and this is not expected to change on July 10th. The ambition of the party, so used to success, was already hurt  in the 2011 election when its share of the popular vote sank to 60.1%, although such a result would have been more than a dream for most other parties world-wide.  But in the 2015 general election the PAP recovered with 69.9%.
The opposition, now as ever, is divided and hardly capable of building sufficient trust among themselves for strategic candidate-placing and avoiding three-cornered fights. The Workers’ Party alone has managed to win and defend a group representation constituency (GRC) where each party has to field a group of candidates. The system has been introduced by the PAP majority in 1988 to guarantee the official racial balance and a minimum number of minority candidates and MPs. For this year’s election, there are 17 GRCs and 14 Single Member Constituencies (SMCs). The British first-past-the-post system has always catapulted the PAP to a huge majority in parliament, but this time a minimum number of 21 MPs will be guaranteed a mandate, including 9 Nominated Members of Parliament (NMP) representing subgroups in the society and 12 Non-Constituency Members of Parliament (NCMP) – the “best of the losers” in case the opposition does not win these 12 seats on its own strengths.

Apart from the Covid-19 problems, this election is unusual in several aspects: