Partyforumseasia: The legendary Indonesian flexibility allows not 50 but up to 98 shades of gray, leaving little space for clear-cut black and white if you take the political reality at 100. But Golkar’s long march from Aburizal Bakrie‘s stubborn sticking to the Prabowo opposition after losing the presidential election to join the Jokowi coalition seems to have come to an
end. 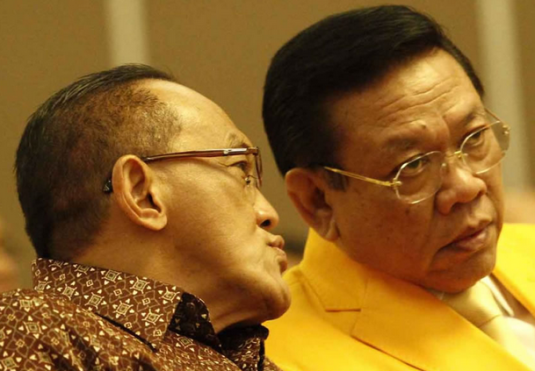 With the memory of saving its privileged government experience under Suharto well into the democratic era, it is no wonder that Bakrie’s opposition course would face stiff resistance among party members and leaders who prefer to be in power. If old fox Bakrie did not see this trap this may signal the end of his political career. But don’t count him out yet, the shades of gray may give him a second chance.
The internal struggle had developed in rather dramatic form with a party split and the election of two competing leadership teams under outgoing Aburizal Bakrie and new leader Agung Laksono. The Jakarta Globe on 17 March describes the rift as “The war between two rival factions of Indonesia’s oldest party reached a new height on Tuesday, with claims, accusations, lawsuits, threats and sanctions flying between the sides.” (Link here)
After inconclusive attempts to solve the problem with the internal party tribunal or the Central Jakarta District Court, the decision for Agung Laksono has been made by his growing support in the party, defections from the Bakrie camp, and finally by Bakrie dropping his law-suit against Agung last Tuesday, 17 March.
Under the Agung Laksono leadership Golkar will support the Jokowi government  with its 91 members of parliament and finally tip the scale against the so far dominating Red-and-White opposition coalition. A parliamentary majority for the president is certainly good for Indonesia and a smoother legislative process.
But Golkar is not yet part of the ruling coalition. In a meeting with PDI-P chair Megawati this week, neither Agung nor Megawati mentioned the accession to the government coalition. The open question is of course the compensation for the support in terms of government positions, not easy to solve when all the posts are filled already. The shades of gray may help!