Partyforumseasia: The ongoing controversy around political data mining has catapulted the discreet services of Cambridge Analytica (CA) into the international limelight. CA has obviously played an important role in Donald Trump‘s victory over Hillary Clinton, and its utilization of Facebook data is now in the center of the storm. Whistleblower Christopher Wylie, one of the brilliant young data experts in CA, has made public the dubious methods applied by the company.

Having offices in New York, Washington, and London, in countries where election campaigns are known to be sophisticated and dirty, Brazil is another client country, and there is only one more: Malaysia! The looming election (GE14), expected to be called in May, has

already triggered a heated exchange of suspicions and accusations, since CA had been hired by the ruling Barisan Nasional (BN) coalition in the 2013 election to win back the federal state of Kedah from the opposition. Obviously learning only now that the BN had hired CA, the opposition wants to know details about Prime Minister Najib‘s role in the deal. Najib, as usual, denies everything and directs all the blame on Mukhriz Mahathir, former chief minister of Kedah when he was still member of UMNO, and in charge of the 2013 campaign. Mukhriz, in turn, denies any involvement, even knowledge of Cambridge Analytica.

Whatever will eventually come to the surface, a glimpse into the services of Cambridge Analytica must create respect, if not admiration, for the technical ingenuity of this company. It is indeed combining all sorts of campaign instruments and strategies with the new opportunities provided by social media and internet penetration, including the dirty tricks which have tarnished the lofty democratic ideals of the United States. What is the background of CA and its parent company SLC Group, a data giant with 25 years experience in helping governments and military organization in over 60 countries with “behavioral change programs” (SLC homepage)? Involved were controversial figures like Steve Bannon and Russian experts, and the funding was mainly provided by hedge fund billionaire Robert Mercer, one of the prominent supporters of Donald Trump.

For anybody who has participated in election campaigns, the services of CA Political, the campaign branch of CA, must look more than attractive. They have been paid with many millions world wide and are certainly affordable for potential clients like UMNO. The branch office in Kuala Lumpur is not there by accident. And the revelations might impact the coming campaign and the chances of the opposition.

Here are some excerpts from the CA homepage (LINK, which might disappear any time from now if the scandal widens):

POLLING
With one of the best track records of accuracy in the industry, we will provide you with in-depth polling to advise informed decision making.

TV AND DIGITAL AD PLACEMENT
Through our detailed models, predictive analytics, and sophisticated ad-tech, you can find the most effective locations for ad placement and meaningfully impact your voters.

REAL-TIME REPORTING
With our up-to-date reports, you will stay informed on the progress of your campaign and assess your voters’ reactions to the campaign in real-time.

GET OUT THE VOTE (GOTV)
Drive organized and methodical ballot initiatives, targeting the voters who could swing the election in your favor. 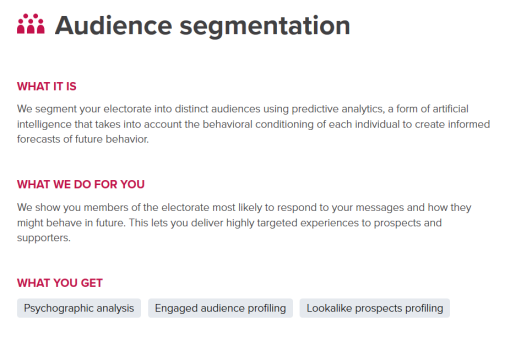