Partyforumseasia: The Institute of Policy Studies (IPS), a research center of the Lee Kuan Yew School of Public Policy at the National University of Singapore, discussed this question on January 25th. After the other dominant political party in the neighborhood, Malaysia’s UMNO, was defeated in May 2018 and goes through one crisis after the other since then, many were asking whether the hegemony of Singapore’s PAP would eventually shrink or even end as well. In fact, it did shrink by 8.6 per cent in the last election in 2020 but won with 61.2 per cent a still rather comfortable absolute majority in parliament, compared to the increasingly precarious results for the catch-all parties with long government experience in other parts of the world. Singapore’s British-inherited first-past-the-post electoral system rewarded the PAP with 83 out of the 93 elected members of parliament. The total number is 104, including two “non-constituency” MPs (NCMP) which were given to the best loser, the new Progress Singapore Party (PSP), and nine Nominated MPs, who are supposed to offer non-partisan views from different sectors of the society. The nominated MPs are a relic of the times when the PAP won all seats, when many were not even contested by opposition candidates, so-called “walk overs”, meaning that the PAP candidate had already won before the election. In the June 2020 election, the results suggest that a two-party system is evolving with the Workers’ Party (WP) increasing its number of elected MPS from six to ten, winning two Group Representation Constituencies (GRCs), one with five seats and one with four, plus one single member constituency. The leading opposition party showed a remarkable resilience and growth over the last years after winning a GRC for the first time in 2011. Apart from the surprise success of the new Progress Singapore Party, due to the leadership of a popular challenger for the last presidential election, a former PAP MP, the nine other competing opposition parties could not win any seat at all.

So, what does the question of a two-party system actually mean for Singapore? Would it be close to the US-system, where two main parties compete for the governing mandate, with smaller parties restricted to a spoiler role in some elections, or more the British model, where the two long-term competitors alternate in government but sometimes need a coalition partner from a third party like the Liberal Democrats? In Singapore, nothing like the Workers’ Party taking over the government can be imagined, even in the longer term. The PAP rule over the last half century has been seen as efficient and successful and winning the trust of the voters, even considering that the party has massively highlighted its own achievements in the media and questioned the competence of the opposition parties. However, this type of “valence politics” or “competence voting” has changed already  in the 2020 election. A survey with 4,000 respondents by the Institute of Policy Studies late last year shows that the Workers’ Party’s credibility rating has risen remarkably close to the PAP results. While the PAP credibility has fallen in all age groups, the Workers’ Party’s ratings have improved nearly at the same rate, especially so among the older generations who were always supposed to be staunch PAP supporters having witnessed the spectacular development of the island “From Third World to First” as Lee Kuan Yew described it. 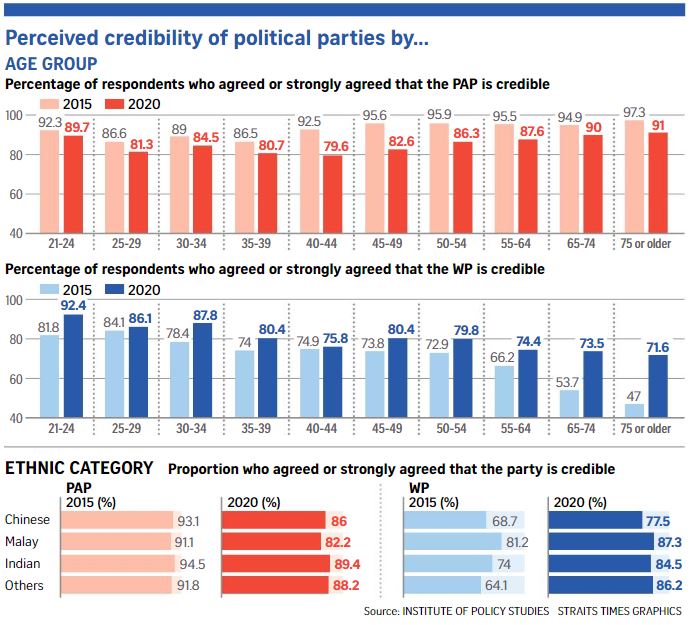 Some Singaporeans criticize the WP leadership as being too moderate and not challenging the PAP enough. Knowing that they are extremely far from any chance to take over the government, it is true that they did not come up with alternative grand visions for the future of the country but focused instead on constructive suggestions and contributions in parliament. This strategy and the recent smooth transition of the chairmanship have been successful in the election and earned WP-leader Pritam Singh the title and office facilities of opposition leader.

Another aspect which distinguishes Singapore in the region is the apparent absence of money politics. A comparison with neighboring Southeast Asian countries with their wild swings in party and coalition developments, the stable but not static Singapore situation reveals its value. Throughout the region money plays a decisive role in party politics and all too often leads to the personal enrichment of politicians, while poor candidates practically cannot win an election.  Singapore does not only rank close the top in Transparency International’s Corruption Perception Index but has the tightest and best controlled regulations for campaign costs as well. Given the PAP’s government control and experience, this is not yet creating a completely level playing field but at least facilitated the Workers’ Party’s steady rise in the last few years. There is always criticism of the high ministerial salaries in Singapore, but except on this top level, political engagement on the ground is not financially attractive. That is and should be the norm in liberal Democracies.

For more comparative details see our 2018 book on party funding and money politics in Southeast Asia: