Partyforumseasia: The DAP party convention on 14 December 2014 has sharpened the profile of Malaysia’s biggest opposition party in the Federal Parliament.

Helped by the next financial mega scandal with the billion $$ 1MDB sovereign wealth fund and the festering long term controversy over the introduction of Islamic criminal law (hudud), the convention tried to show the party as a credible and reliable alternative to the ruling Barisan Nasional coalition.
Headlines of reports on the convention range from “The rise of DAP” (Malaysia Chronicle, LINK) to  “As DAP makes history, members worry over ties with PAS” (The Malaysian Insider, LINK) or “DAP shows ‘Malay face’ as party targets Umno” (Malaysiakini, LINK).
The main results of the meeting, namely a new women’s quota of 30 per cent, increased involvement in Sabah and Sarawak to weaken East Malaysia as UMNO’s “vote Bank”, as well as the clear stand on hudud are certainly clever strategic moves which may help to broaden the voter base of the party. But the DAP also goes visibly an extra mile to shed its image of an ethnic Chinese party and open up to the Malay majority:

“Urgings for DAP to shed its Chinese-centric image and embrace more Malay members have been a staple message since the party’s rise in 2008 but something was visibly different at the party’s convention today.The difference was probably most felt among some of the Chinese-speaking elderly DAP members who had complained they could not understand “90 percent” of the speeches.The apparent gulf between the party’s elderly members and its mostly young speakers who spoke at the convention in Subang Jaya was perhaps symbolic of the transition the party was undergoing.Speeches at the DAP convention in Subang Jaya were predominantly in the national language, peppered with Chinese, English, compared to its previous more Mandarin-oriented tone.” (Malaysiakini)
According to the party’s homepage the four rocket boosters in the logo symbolize the main ethnic groups in the country, Malays, Chinese, Indians and Others….

The DAP is Malaysia’s second biggest political party and gains additional strength from a number of helpful developments: Number one is probably the fiasco of arch-rival Malaysian Chinese Association (MCA) in the last parliamentary election in 2013. MCA lost eight seats and DAP won ten. MCA, supposed to be the Chinese vote collector of the ruling BN coalition under UMNO, has lost this role and the trust of the Chinese Malaysians. But DAP is also successful in attracting more liberal-minded Malay voters who see the growing probability of the introduction of Muslim criminal law or hudud in the country. “Hudud” and the ambivalence of its backers whether it will apply only to Muslims or not is a growing concern and divisive issue. Among the members of the opposition coalition Pakatan Rakyat (DAP, PKR,PAS) DAP is the clear leader in the popular demand to uphold the secular character of the state and declare the broad based introduction of hudud unconstitutional. Coalition partner PAS derives much of its success and identity from its Muslim credentials and has to support hudud, which can possibly weaken or even break up the opposition Pakatan Rakyat coalition.

Partyforumseasia: In authoritarian systems people are used to read between the lines, ignoring more or less the propaganda packaging of the news. The attached recent article from Vietnam News allows a glimpse into a way of informing the public which looks touchingly old fashioned in the age of internet and social media. The powerful secretary general of the all powerful single party has a nice discussion with a group of  undefined voters informing them about the good progress in the work of party and government.
But the list of shortcomings in this report is long and comprehensive. The voters are concerned about corruption, low quality and hazardous fake products, the high public debt, slow law enforcement, public service (or probably bureaucracy) reduction and the organization of the People’s Council. Rectifying all these is really a tall order for government and party, but at least the voters know that they are working on it. And “Ho Chi Minh’s moral example” will help.

Vietnam News 8.12.2014 Link here:
Party General Secretary Nguyen Phu Trong met with voters in Ha Noi’s Ba Dinh, Hoan Kiem and Tay Ho districts on Saturday to inform them of the outcomes of the National Assembly’s eighth session and listen to their opinions. Most voters praised the outcomes of the session, especially the vote of confidence and responses cabinet members gave during question-and-answer sessions. Many voiced concerns about issues related to corruption and low-quality and fake commodities that seriously affected people’s health. Regarding foreign investment attraction, they emphasised the need to carefully consider socio-economic and defence interests, ensuring that investment did not affect national security. Voters also worried about high public debts and Government bond debts, slow enforcement of laws, and emerging problems in education and training. Acknowledging voters’ opinions, the Party chief said that during the NA’s eighth session, 30 laws were debated, 18 laws were passed and many important resolutions were approved. Deputies passed a resolution to conduct a vote of confidence on officials holding positions elected or approved by the NA and People’s Councils, he said. He also agreed with voters on the need to promote the role and responsibilities of deputies to ensure the quality and efficiency of the NA.
Regarding anti-corruption efforts, Trong said the Party was determined to fight corruption and wastefulness without compromise while maintaining political stability. In the coming time, the Party would continue speeding up implementation of the Party Central Committee’s resolution on party building as well as the Politburo’s resolution on studying and following President Ho Chi Minh’s moral example, he said. Regarding the East Sea issue, General Secretary Trong underscored that a series of measures had been rolled out to protect national independence and sovereignty while maintaining an environment of peace and stability for development and friendship with other countries, and not allowing external forces to cause disturbances. “We are determined to follow a foreign policy of peace, independence, self-reliance and friendship with all countries,” he said. He also mentioned a number of issues raised by voters, including public servant reduction, wage reform, the organisation of the People’s Council and ensuring law enforcement. Trong said he hoped to hear more from voters to help the Party and National Assembly improve their performance. (…)”

For more information see: Le, Kim: The Communist Party of Vietnam: A Party in

Partyforumseasia: Indonesia’s traditional shadow play (wayang kulit) has often been used to describe the political scene. The public can only see what happens on the

screen and everything behind the scene remains hidden. The art of party politics tries to hide all the backroom deals and unpopular internal quarrels in order to entertain the target groups with clean-cut but often enough illusory pictures.
What happens these days with the Golkar party seems to be a sort of reverse wayang kulit. The power struggle and factional fight is all too visible in front of the screen and its ambitious chairman Abrizal Bakrie (ARB) can no longer hold the party together.
Golkar (or Functional Groups), formed as an instrument of president Suharto’s infamous guided democracy, was the ruling party since 1973 and coalition partner under president Yudhoyono in the democratic era. This long participation in government also means that many members have enjoyed the spoils of power and are not very amused that their chairman is keeping them now in the opposition.

Aburizal Bakrie is a rather controversial leader. Part of a family business conglomerate, he was considered the richest Indonesian in 2007 by Forbes, but does not appear on the Forbes Asia List any more. His brother was a big sponsor of presidential candidate Prabowo whose defeat spoiled Bakrie’s ambition for the vice presidency after he could not get the presidential nomination of his own party. Golkar is still the second biggest party but many blame its vote plunge from 22 to 14 per cent on the chairman.
Bakrie has probably punched above his real weight by calling a convention ahead of schedule in Bali, outmaneuvering possible rivals by sacking them, and changing the party rules to be re-elected by acclamation instead of the usual secret ballots. This authoritarian and undemocratic style may well fan the discontent of party members further.
Meantime, only a week after the Bali convention and with endorsement of former chairman and now vice president Jusuf Kalla, Bakrie’s critics have organized an alternative party congress and elected former deputy chairman Agung Laksono, who

is also leader of the so-called “Presidium of the Golkar Party’s Saviors” as Golkar Chairman. Since two competing chairmen are not foreseen in the party’s constitution, both camps have submitted their election results to the Ministry of Law and Human Rights for confirmation.
Whether the ministry finds a Solomonic solution or not, the party split is too obvious and Golkar dangerously at the crossroads.

Partyforumseasia: Singapore’s People’s Action Party (PAP) has elected its Central Executive Committee (CEC) last Sunday, 7th December. About 2000 cadres in the white party dress came together in this biannual ritual. They are supposed to be the most reliable party members but apart from electing the CEC they have no other privileges.
The results were no surprise. Among the twelve elected members there is only one newcomer, manpower minister Tan Chuan-Jin. He replaced defense minister Ng Eng Hen, who came out as number thirteen and was automatically co-opted together with speaker of Parliament Madam Halimah, number fourteen. 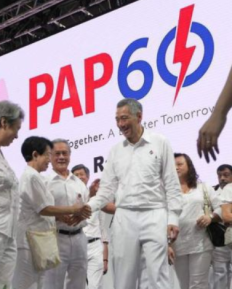 Secretary-general Prime Minister Lee Hsien Loong used the opportunity to introduce changes to the party constitution with updated objectives. Upholding the multiracial and multi-religious, fair and just society and the vibrant economy are not that new to Singaporeans. “Serving all Singaporeans responsively and responsibly, attentive to immediate concerns” is certainly a  good objective for any party, but the “focus on long-term challenges and opportunities” is a strong point for the PAP, which other parties in the region ruling as long as the PAP cannot claim.
“To strengthen an open and compassionate meritocracy” and “To develop a democracy of deeds” sound somewhat vague and will have to be clarified in practice.

The Real Surprise of the Rally:
The idea that the opposition could win the next election, due by January 2017 at the latest, or that the country is heading toward a two party system with PAP and Workers’Party (WP), may sound rather unrealistic for most Singaporeans, the “men in white” included. But the election could be called earlier as well, maybe closer to the 50th anniversary of the Republic, and the Singapore Democratic Party (SDP) announced already that it is starting its preparations. So the Prime Minister’s battle cry can be understood as a signal to the party and the opposition at the same time. Ruling since 1959 and entrenched in all sorts of administrations and organizations, the party could take too many things for granted. The 2011 loss of a group representation constituency with six mandates to the Workers’ Party and the following by-election loss
(one seat) in 2013 were alarming enough for the leadership. And in 2014 Roy Ngerng, a young blogger, attacked the Prime Minister on alleged mismanagement of the compulsory retirement fund CPF. Lee reacted by suing Ngerng, but donations from the public for his fine and legal fees revealed the surprising extent of support for the issue and the latent mistrust in the CPF scheme at large. As all long ruling parties the PAP has to face adverse undercurrents among the voters and their extent is not easy to assess. The 60.1% in 2011 are still a dream result for most parties in the world but a reason for concern in a party used to super-majorities.
The message to the opposition, of course, is clear: Don’t feel safe in your supposed strongholds in the East of the island, we will go all out to win back these constituencies.