Partyforumseasia: According to the World Population Report, Indonesia’s capital has 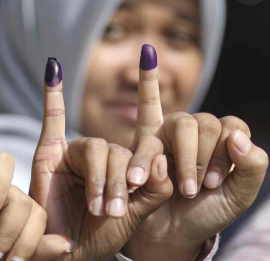 more than ten million inhabitants. The local media count more than seven million eligible voters for the second round of the gubernatorial election which has started this morning, Wednesday, 19th April. In the early afternoon, private polls report a small lead for the former education minister Anies Baswedan over incumbant  Basuki Tjahaja Purnama, or “Ahok”. Ahok was considered to win the election easily after taking over from president Jokowi after the latter moved to the presidential palace in 2014. Ahok was known as a decisive administrator, cleaning up the mega-city in many ways, but somewhat arrogant and brash which does not go well with the traditional Javanese politeness. But the decisive setback was the lawsuit for blasphemy under Articles 156 and 156a of the Indonesian Criminal Code (KUHP) , started by his enemies. In September 2016, Ahok had discounted claims that the Quran forbids the election of Christians and Jews to public office, and Ahok is in a double minority role as ethnic Chinese and Christian. Since the case is still pending, Ahok faced a severe handicap in his campaign, though his efficiency as governor has kept him a strong following. But the controversy and the  huge rallies organized by powerful conservative Muslim organizations have divided the Jakarta electorate, so that the voter turnout today is expected to exceed the 77% of the first round in February. Security measures are tight, under the threat of Muslim zealots intimidating Muslim Ahok supporters, more than 60,000 policemen are deployed around the polling centers.

Beside the outburst of religious sentiments on an unprecedented level, the religious parties being not too successful otherwise, this election is also highlighting other peculiarities in the dynamic political development of Indonesia’s democracy . Like in most countries in Southeast Asia, money politics and vote buying are rather common. The Election Supervisory Agency (Bawaslu) has warned against smear campaigns and vote-buying attempts, while numerous such violations are already under investigation. For the poorer voters it can start with staple food donations which are disguised as religious alms giving, but money is changing hands as well, and the manipulation attempts can reach practically all the 13, 034 polling stations.
The Indonesian Corruption Watch, many NGO’s, and of course the political parties behind the candidates, try to monitor the election process and have set up hotlines for reports by the public. Final and official results are not expected before end of the month.