Partyforumseasia: The peaceful handover from a military junta to a victorious opposition in Myanmar notwithstanding, Southeast Asian domestic politics is hardball from the textbook. Eliminating opposition when it develops into dangerous competition is not the most elegant or democratic way of staying in power, but it works. Challengers easily land in prison, like Anwar Ibrahim in Malaysia, or in exile, like Thaksin Shinawatra in Thailand, and Sam Rainsy in Cambodia. Neither of these standard solutions can completely silence them, though. Especially the exile solution is being undermined by advanced communication technology. The Phnom Penh Post (31.8.2016, LINK) gives an example of opposition leader Sam Rainsy addressing a group of followers at home via Skype from his exile in Paris: 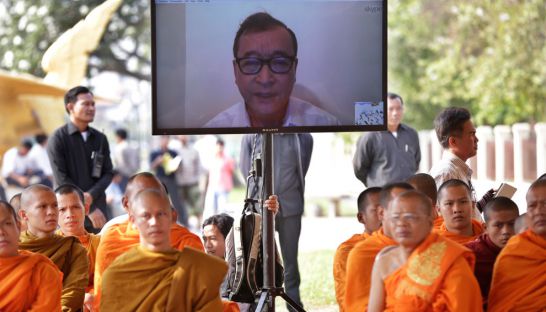 The CNRP opposition, obviously seen as too dangerous by Prime Minister Hun Sen and the CPP ruling party, has come under growing pressure by a remarkable arsenal of “torture instruments”. It’s lawmakers are being beaten up outside Parliament by thugs difficult to identify, Sam Rainsy prefers to stay in Paris because an older defamation lawsuit has been warmed up. The court refuses to hear his arguments via Skype and insists that he has to appear in person. With a string of other lawsuits and convictions pending, two years for defaming foreign minister Hor Namhong in 2008, a potential 17-year sentence for forgery and incitement, and other defamation suits, he understandably prefers to stay abroad.

Legally more than dubious, as the Phnom Penh Post reported on 30 March, the chief of Cambodia’s Anti-Corruption Unit threatened to investigate Sam Rainsy for corruption “if he continues to speak out against the graft case (Link) currently levelled at his deputy, Kem Sokha.”  Trying to silence a politician by threatening another investigation is indeed a desperate level of political competition.

CNRP vice president Kem Sokha is under a very different type of pressure. Based on a  number of taped phone calls with alleged mistresses the media are reporting for weeks already about a so called “infidelity scandal” while Kem Sokha and the supposed mistresses deny the relationships. It is not infidelity alone, alleged are also expensive presents like money and a house. While it is unclear why students might want to demonstrate against the popular politician as they are reported to do, the manoeuvre looks like a good old character assassination.

The whole campaign against the opposition signals the threat and growing insecurity felt in the  ruling party. “Neutralizing” the top leaders of the opposition in time before the next general election, due only by July 2018, may work, but especially the younger generation of Cambodians signals less patience with the CPP-Hun Sen rule. The ongoing brutality against the CNRP might produce a bigger backlash than expected.