Partyforumseasia: Indonesia has been rather radical though quite successful in reducing the number of political parties in the democratic era since the ouster of Suharto. An all too splintered party system is risky for a fledgling democracy in many ways, starting from confusing election outcomes and ending in the lack of transparency about vested interests and problematic interference of business influence. President Widodo’s role as leader of the nation is still heavily handicapped with his lack of a parliamentary majority and continuing infighting in parties like Golkar and PPP, this is why stability of the party system is important. 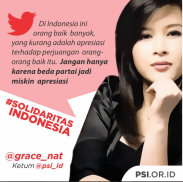 On this background and given the prevailing practices of funding and money politics it may be rather daring to start a new party from scratch. But the leader and figurehead of the new party, 32 year old Grace Natalie, may have some good arguments for her initiative. “She is young and beautiful. Her political party, Partai Solidaritas Indonesia (PSI), or the Indonesian Solidarity Party, was established only in March this year as an “open, pluralist and nationalist” organization. Yet, about a week ago, 32-year old Grace Natalie, former journalist and television presenter, declared that PSI is ready to contest in the 2019 general election. Claiming to be a party by young people and for the young people, the PSI will early this month (June 2015) formally invite Indonesian citizens to register themselves online with the party if they wish to become its cadres or supporters. Registration is made through its website, intro.psi.or.id.” writes the news startup Global Indonesian Voices (Link).

Good looks are getting more important in politics world wide, though former prime minister Yingluck Shinawatra from Thailand is not the best example in this context because she is in trouble now. But there is certainly a groundswell among Indonesian voters against the same old macho and money style politics, especially among younger voters. The young party seems to have met already the rather demanding organizational requirements of the party law. Grace Natalie says that they have already established chapters in all 34 provinces and in almost all of the 412 regencies/cities with around 1,000 cadres at the provincial and regency/city levels. The Jakarta Post calls Grace Natalie “The anomaly in Indonesian politics” (Link). Yes, an anomaly she is, the strong lady in Indonesia’s politics, Megawati Sukarnoputri, chairperson of PDI-P, is known for a rather authoritarian style which reminds of the Suharto years and what socio-political analyst Julia Suryakusuma has described as “State Ibuism” (see link to Inside Indonesia for an update on this concept).