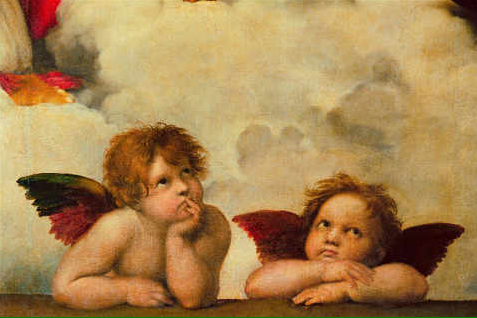 Partyforumseasia: Busyro Muqoddas, chairman of the Anti-Corruption Commission (KPK) of Indonesia, has called the Prosperous Justice Party PKS “not a party of angels”. The latest series of scandals has been highlighted by John Mcbeth in the Straits Times of July 2d 2013. Here is a part of his report:

Apart from doubts about the complete innocence of angels – even these famous ones by Raffael have some mischevious twinkle in the corner of their eyes – Partyforumseasia does not know any party of angels in this world. The question is whether Indonesians are so used to corrupt politics and politicians that they don’t expect angel parties or somewhat cleaner than the others-parties any more.
Another interesting observation of Mcbeth is the split between more religious and ideological PKS members and the more secular pragmatists who adapt to a more affluent lifestyle and don’t mind to make some bucks in the shadow. Only the next elections will show whether voters seriously mind corruption in a major Islamist party or take political corruption for granted.

Partyforumseasia: The (Islamist) Prosperous Justice Party (PKS) had won 7.34 % in the 2004 election on its anti-corruption stance and promise of good governance, and probably profited as well from its credibility among religious voters. So the arrest and indictment for corruption of former leader Luthfi Hassan Ishaaq in January has heavily dented the credibility of the party. The recent re-election of West Java governor Ahmad Heryawan and his running mate Deddy “Demiz” Mizwar ( see link: “The awesome power of sausage politics“) must be seen as an attempt to counter the loss of credibility by using a popular PR-professional as running mate. It would probably be wrong for the party to take the governor’s re-election as a sign that the voters are forgetful.