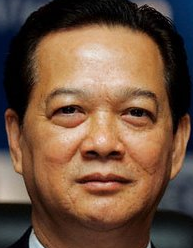 Partyforumseasia: Prime Minister Nguyen Tan Dung and his government risked a confidence vote last Monday, 10 May, for the first time in their regime’s history. Given the 90% majority of the Communist Party in Vietnam’s Parliament and the remaining 10% not really antagonistic opposition, the risk was not life threatening.
But more than 30% “low confidence”votes may
be signaling Dung’s fading popularity for a lackluster performance widely blamed for the slow economy on one side. On the other hand they will give hope to the population that their unhappiness with party and government will not go unnoticed by them any more. The keen interest in specially televised parliamentary debates since a couple of years shows that citizens are not indefinitely prepared to suffer in silence. But will the party be capable of opening up? Will rivalries inside the ‘nomenclatura’ allow for genuine party reform? See more details in today’s (link:) New York Times article.