Partiforumseasia: According to traditional political wisdom and experience in the Philippines, the real meaning of the Golden Rule is the rule of those who have the gold.
In this presidential election, however, there are candidates outside the plutocratic establishment. And if the polls are sufficiently reliable, one anti-establishment candidate has a good chance of being elected:

Rodrigo Duterte (nickname “Digong“) is so popular because of his cleaner but more brutal law and order policies as mayor of Davao city, including a huge number of extrajudicial killings of criminals. The contrast to the ruling Liberal Party’s candidate, Mar Roxas, could not be bigger. Roxas is a cultivated, well traveled intellectual politician from the quasi aristocratic upper class and successful minister in Aquino’s outgoing cabinet. In the latest polls Roxas stands at 20 % behind Grace Poe with 22% and Duterte with 33%! Duterte seems to be totally eligible for the poor masses and big parts of the middle class as well, who are already soul searching before the election on 9th May. Imelda Deinla from the Australian National University sees the failure of the elites to establish a minimum level of the rule of law and to reduce the rampant corruption and inefficiency of the civil service. See her comment “Rule of law deficit behind voter dismay in Philippines” (LINK) in the East Asia Forum. Narciso Reyes Jr., a former journalist and diplomat, has a deeper psychological analysis of the voters and the darker side of their hopes and aspirations. Here is short passage of his article in the 4th May Inquirer (LINK):

“Duterte’s incredible popularity, despite his crude blunders (…) is evidently being fueled by an atavistic, primal instinct among our people who crave order and a better life under the strong arm of a man with a seeming license to kill.”

The elite is in panic mode! The latest move, supported by President Aquino, is warning against a Duterte dictatorship and urging the candidates Mar Roxas and Grace Poe to join forces in order to prevent Duterte…

On a different level, but rather interesting is a comparison with the US presidential campaign. A frightened elite is exploring ways to prevent Donald Trump, who has money himself and will attract more donations now. Duterte is probably not that rich but will not be short of funding either. According to media estimations presidential campaigns in the Philippines cost between 2,5 and 3 billion pesos (or 53 to 65 m US$), and 80% of it going into political ads. Nielsen Media reported that even before the official campaign period started on 9 February, 7.5 billion pesos (nearly 160 m US$) had already been spent for ads of all kinds. But the media campaign is being dwarfed by the carnival atmosphere in the streets when the candidates show up in person. Being the most important crossroads decision in the country’s politics, the 55 million voters in the Philippines are politicized on a high voltage level. When the counting works well, the country is running the elections technically quite professionally, we will see the result within a few days. 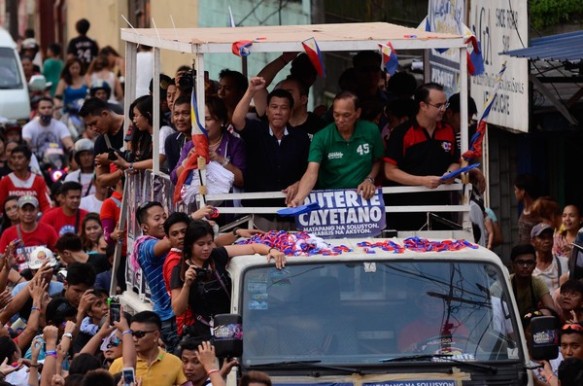 Partyforumseasia: By coincidence, but not completely surprising, the similar presidential systems in the United States and their former colony, the Philippines, are heading for the election of their next president. The Philippino voters will go to the ballot boxes on 9 May, the US voters will follow half a year later, on 8 November. There are striking similarities in the campaigns of the candidates, some rather, even extremely shrill and – compared to many former presidential races – increasingly populist. The political parties supposed to support a candidate in both systems are being more or less eclipsed as party membership, affiliation or quiet support are increasingly vanishing in both countries. Popularity at any price and fundraising are a big factor. But credible narratives as trademark and emotional identifier of the candidates are increasingly playing their role as well.

Just a month before the election, political scientists Julio C. Teehankee, De La Salle University and Mark R. Thompson, City University of Hong Kong, offer a fascinating insight and overview of the electoral situation in the Philippines in an article published 8 April in the EastAsiaForum (full text here LInk):

Here are some glimpses into the article:
“Commentators often view Philippine presidential campaigns as determined purely by popularity, name recall or money. But this overlooks the importance of the enduring narratives that candidates draw upon to woo voters’ support, via widespread political campaigning both on air and on the ground.

While political parties are relatively weak in the Philippines, presidential candidates have based their campaigns on the major narratives of reform, pro-poor populism and neo-authoritarian calls for ‘peace and order’.

Those looking for a ‘safe pair of hands’ to maintain internal political stability and guide the Philippines through both a difficult world economic environment and tense relations with China may look to Mar Roxas, who prospered under the current administration. But Roxas, who has a long record in government, has struggled to gain traction with his promise to continue the ‘straight path’ (daang matuwid) — a reference to Aquino’s anti-corruption reform agenda. (…)

The most promising candidate in many ways is Grace Poe. Poe combines the pro-poor ‘populist’ appeal of her adoptive father — actor-turned-politician Fernando Poe, Jr. — with her image as a competent and serious-minded reformer. Where Duterte offers an iron fist, Poe offers a velvet glove. But her message is failing to take root.

Poe narrowly avoided disqualification for becoming a US citizen before returning to the Philippines over a decade ago. This has led to worries that she is out of touch with the average Filipino. On top of this, the endorsement of the Nationalist People’s Coalition and her defence of its founder — former Marcos crony Eduardo ‘Danding’ Cojuangco Jr — have led to charges she is a ‘puppet’.”