Partyforumseasia:  Yesterday The Phnom Penh Post surprised with reporting on a possible compromise between PM Hun Sen and the opposition led by Sam Rainsy: 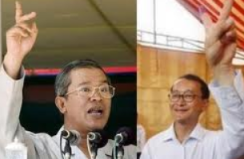 With the crackdown on striking garment workers two weeks ago the situation in Phnom Penh looked worse than the crisis in Bangkok. But the Thai deadlock is far from over and the intransigence of Suthep Thaugsuban (“No win-win situation, it is either they win or we win…”) signals a further increase of unrest.
Whatever the outcome in Cambodia may be, it is encouraging to hear Sam Rainsy give credit to the CPP leadership. “But they are also responsible people to some extent” he said in a press conference. The demands of PM Hun Sen to step down and snap elections being held was dropped. Instead the negotiations should focus on electoral reform, adjustments in the parliamentary set up and a TV license for the opposition.
All this may be Southeast Asian shadow play, but it could be a reminder to big neighbor Thailand that democracy is substantially compromise – for the benefit of the country.

Partyforumseasia: … between the devil and the deep blue sea, or in the more drastic German variation of the saying, choosing between plague and cholera?The problems of the Democrat Party are serious enough: It has not won an election since 1992, it narrowly escaped dissolution for irregularities with campaign donations, Chairman Abhisit Vejjajiva, just re-elected yesterday, is indicted for murder as main responsible for the army crackdown on protesters in 2010, and Prime Minister Yingluck may have outmaneuvered them by calling elections for February.
The Democrat lawmakers have resigned en masse to join Suthep Thaugsuban, a former deputy Prime Minister and prominent Democrat. Suthep is now the leader of protests against the “Thaksin system”, rallying hundreds of thousands and organizing illegal blockades around ministries and government buildings. This political “pied piper of Hamelin” is demanding that an unelected “people’s council” introduces reforms before the next Parliament may be elected in a year’s time.

If the Democrat Party follows Suthep, they will decide on 27 December to boycott the February elections. Participating would probably mean that they lose against Puea Thai, the Thaksin Party. Boycotting would mean losing the Democrat in the party’s name. The party is probably split internally, so their strategy of resignation from Parliament may turn out to be more kamikaze than strategy.

But PM Yingluck had her own kamikaze strategy: her amnesty bill triggered the whole turmoil the country is facing now and more and more affects tourism and economy.